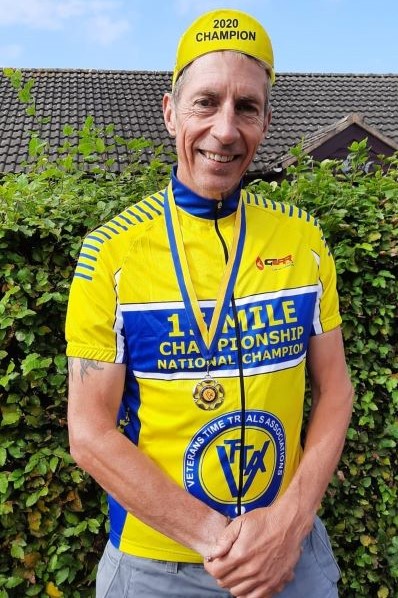 The 15 mile championship, postponed from March, was run on Sunday 20th September – a bright and dry morning but with a noticeable breeze slowing riders on the outbound leg on the A53 towards the roundabout at Ternhill, north of Shrewsbury. The event was oversubscribed but all VTTA members got a ride as did all 10 reserves.

The women’s championship was won by Deb Hutson-Lumb of Merseyside Group in an impressive 35.58 with Debbie Moss (North Lancs & Lakes) taking the silver medal and Sue Semple (Midlands) the bronze.

The men’s championship saw another outstanding ride by Keith Ainsworth (North Midlands) giving him a winning margin of over one minute. Second on standard and fastest time of the day went to Mark Holton (North Lancs & Lakes) with a 30:30 just beating Anthony Brown (East Anglian) in bronze medal position. Honorary mention should be made of Ken Stevens who at age 90 rode sub 50 minutes to set a new age record..

In the tandem event Ian Greenstreet and Rachael Elliott continued their winning ways setting a blistering time of 29:53 for a plus of 10:26. The tandem trike pair of Andy Newham and Ian Pike also set an age record.

Keith Ainsworth commented on the event 'I really enjoyed it, thought the semi-sporting course was a great challenge, had to be cautious to hit those early inclines with purpose but not overbake...heart rate was quite escalated at one point early on but pleased that I maintained form where my 5 mile splits were all pretty much identical. Big kudos to Phil Guy and team for putting on such a great event and of course surmounting the issue regarding the original course. They saved the day - most appreciated.'

On the day we even managed to present Keith with his championship jersey and cap (at a safe distance!).

The top 60 in the Men’s results are shown below,